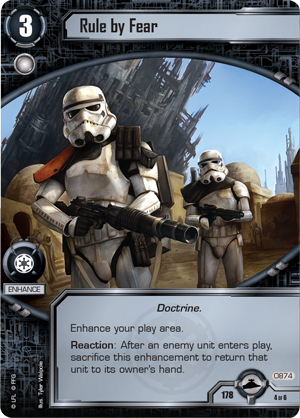 Let’s talk about this unsung hero of The Imperial Navy and how you might utilize it in your Navy kit.


I’VE MADE A HUGE MISTAKE…


There are some cards in the Navy game that are easily dismissible at a three resource cost or higher. Some that come to mind – that could be considerations for a future Micro Card Looks discussion – are things like
Colonel Yularen
and
Captain Zed
. These cards tend to feel heavy in hand early game, and can frustrate and annoy someone not reaching behind the resource cost to the deeper implications of strategy.

Rule By Fear, in my opinion, is one of those such cards. When starting out with 2016 Navy, I would tend to think that this card was an auto-Edge card – meaning, I knew I was less likely to play the card for it’s effect, and more likely to use it’s Force Icon in a defensive Edge battle when being attacked by the Light Side. Think something along the lines of
Orbital Bombardment
– a card that was commonly not utilized until some weird late-game closer circumstance. Eventually, I started to realize the huge mistake I was making.

I think I’ve made a huge mistake…” –Michael Bluth

When I realized my egregious error in undervaluing this card, I was able to climb another rung in my learning-to-master-Navy ladder. Time and again I would chuck this puppy for edge, trying to stop a nasty threat drop like
this guy
, or
this guy
, or
this thing
, all the while missing such a giant point: Rule By Fear provides exactly the kind of control you’re looking for when trying to slow down a rush on your objectives.

So face palm moment aside, I began to realize the immense power this card has mid-game, after you start to stabilize your board with a serious baller (
Grand Moff Tarkin
/
Grand Admiral Thrawn
). You deal with some threats, maybe even get a Luke, Yoda, or Qu Rahn off the table, and immediately follow up a good board stabilization with Rule By Fear. Every time I’ve used the card effectively is at the scale-tipping moment, when the Death Star Dial hits the mid-mark (5-6), and I’ve successfully neutralized at least one big threat (buried under a pile of Focus Tokens, or outright eliminated). This provides that turn-oomph to get you to the 8ish range that Nudjs and the like may have stolen from you.

That guy two tables down in your FLGS who just busted out a M:TG Boomerang defintely knows what I’m talkin’ ’bout.

Bouncing a newly deployed heavy hitter on the opponent’s next turn and stealing any momentum from repeated assaults is invaluable. Coupling this play with a timely
Moment of Triumph
or
Stormtrooper Assault Team
can even put you in a commanding position to mount a comeback or steal a game. Simply put, Rule By Fear is more than face value.

FEAR….FEAR IS FOR THE FEARFUL…


Before we let this marinate in our Navy mind, we do have to realize that the card is fairly balanced, albeit powerful in the right hands. There is a certain moisture farmer that combats Rule By Fear’s effectiveness, and if those Droids aren’t in the South Ridge by midday, there’ll be hell to pay. Who would have thought
that guy
is such a serious baller?

Latest posts by MoSSBerG (see all)