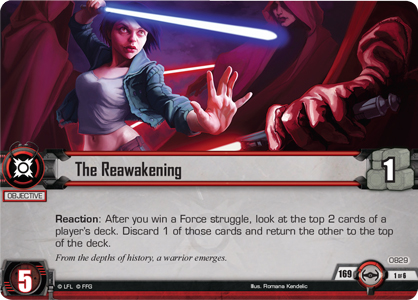 Let’s take a quick look at The Reawakening, and why you might want to run it in your Sith deck.

From looking at the results of the Store Championship thread on Card Game DB, it would seem that there’s a huge rise in popularity for Navy lately. While that’s all well and good, and Navy certainly is Tier 1 in my book (and sort of builds itself), we really shouldn’t forget our brothers in the Sith, which comes as (some would say) Tier-2 choice for Store Champs this season. The Reawakening has made my radar when constructing my sith builds lately.

SOME THINGS NEVER CHANGE…OR DON’T THEY?

I see a lot of lists for Sith sliding around lately – usually rocking the core of yesteryear (
Fall of the Jedi
,
Counsel of the Sith
,
The Emperor's Web
), some with the modified core – my personal flava [Dave], with
The Executor Arrives
in the mix for those
Sith Holocron
-fueled explosive starts or come-from-behind board drops. Whatever the case, the problematic thing about facing Sith is that the lists vary, and you can oft know what to expect as people build them to try to combat the overwhelming Jedi. Sith is naturally good at Character Control, and can somewhat also stifle vehicles with the abundance of cheap cronies (HOLLA!
Emperor's Royal Guard
) and
Ol' Prune Face
, so it’s not a horrible play. One thing that has always been true about Sith is that there has never really been a concrete list other than the famous core three.

That said, what are some things we can try to cheat in with that Core Three for an advantage against Jedi? I personally have been running
The Reawakening
in my Sith list, and finding out how much I have grown to love it. From playing all sorts of card games over the years and generally being a student of transferrence (the ability to apply learned skills to other things) I have grown to love disrupt mechanics. The reverse-Scrye that Reawakening gives you is very powerful in my eyes, particularly on the first turn in which you are nearly certain to have The Force and trigger the effect.

If we think about that first turn in SWLCG, you are seldom starting with an optimal hand. God Hands of 6 cards are a rarity, especially post-mulligan. Add to that the fact that what a “god hand” means in any deck can greatly vary depending on the deck’s focus, and turn one is always a bit sketchy. That usually leaves either player in a place where they are digging for their lives out of a hole, discarding that first card to hopefully stabilize what could be a mediocre-to-bad hand from the get-go. And when you’re Light Side, if you aren’t establishing an offensive board presence against Sith from Turn One, you’re in trouble – especially if you’re staring down at a Holocron or two. That’s usually when I groan. Like, all deep and guttural.

THERE HAS BEEN A REAWAKENING – HAVE YOU FELT IT?

That’s where The Reawakening comes in. It makes the opponent’s medicocre/bad hand potentially stay that way for a few turns, giving you what could be an underrated jump start at the beginning of the game to either stabilize your own hand, or get way, way ahead on defense. And if you can keep The Reawakening on lock every turn – essentially knowing one card in your opponent’s hand every turn alongside screwing over a pick of theirs every turn – it’s a nice position, a nice edge to have when piloting Sith. Since your game should be tight on locking up The Force struggle anyway, it’s also good synergy.

Indeed. Loved that game on PSOne, for all its flaws. And though the EU is dead, it nevertheless is nice to see
Arden Lyn
show up in SWLCG. On that note – and it’s sort of outside the scope of Micro Card Looks, the rest of the objective set for The Reawakening is pretty solid. Arden is a great Yoda/Luke threat with the to help lock down that Struggle. Peruse the rest of the set if you haven’t looked at it for awhile, and leave me your thoughts below on The Reawakening. 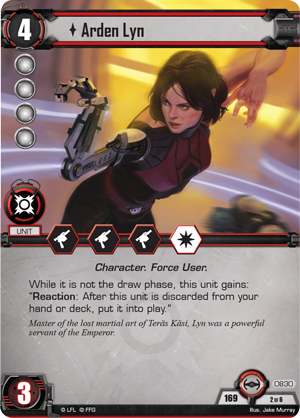 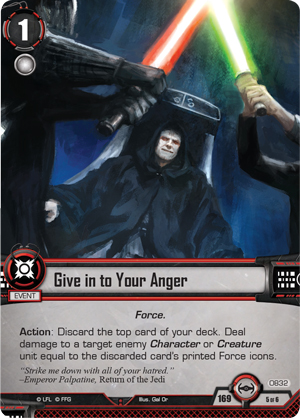 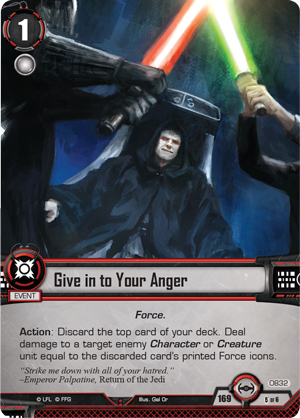 The Reawakening provides some nice extra control to an already-very-Controlsy Sith board. When used appropriately, the pod can shine, denying your opponent key draws and giving card insight to you for defensive power plays and setups. Definitely worth a look, or a re-look, as the case may be.

Latest posts by MoSSBerG (see all)